The man who inspired me, and what he taught me at the Salesforce MVP Summit!

Last week at the Salesforce MVP Summit I caught up with the guy who inspired me to code! 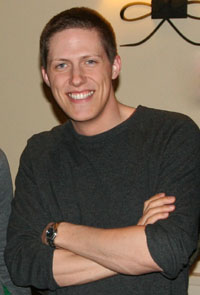 Who he is:
Jason Venable, the first Apex dreamer.

What he does:
Director of Application Development at Arrowpointe.

Where you can find him:
http://www.tehnrd.com/

Why he’s my inspiration:
This site wouldn’t exist if it wasn’t for Jason. I still remember dreaming of becoming a developer. I would have given anything to do so, but deep down I just didn’t believe it was possible for someone with a non-technical background. Everything changed when I heard Jason’s story and attended his Dreamforce session on Visualforce programming. Here was a guy with no training who taught himself how to code so proficiently that he was qualified to speak at Dreamforce in front of the industry’s best. I remember that day so clearly that I still remember where I sat. I’m still following in Jason’s footsteps and I only hope to inspire a few developers, just as he inspired me.

What he taught me when I met him in person:
The first thing Jason taught me is that anyone can code. Jason opened the floodgates for Apex dreamers all over the world. He risked so much in his career learning to code on his own, but he proved to the world that it was possible. And he taught me that it doesn’t matter how smart you are or how prestigious your school or background is – anyone can do it as long as they are dedicated!

Jason also taught me that you should never consider yourself a lesser developer because you don’t have formal training. In fact, you can still become one of the best in the industry! Jason is living proof of this! Hard work and passion are Jason’s best traits, and they are your formula for success too.

Jason, thank you for inspiring me to achieve my dreams. I hope to pass on the lessons you’ve so generously given to me – and maybe inspire the next generation of Salesforce developers!

your statements are too inspirational David !! Keep rocking

Great Post David. I have already starting rolling over Salesforce Bed being a follower of you.

looks like, one more nitin out here now…. hope to get this counting go on and make club SFDCNitin :)

Thanks man! But now you are carrying the torch and inspiring the next wave of developers. Keep doing your thing!

Wow, David! When I get there I am going to write a blog too.. and in that blog I will be thanking YOU for this one. I admire you more each day.

ThatDarnWoman if you ever want to write a guest post on Sfdc99, the floor is yours! hahahaha rock on! You are like an honorary member of the site.

You truly are an inspiration to me !

For me, You are the Inspiration Dave. Thank you for another awe-inspiring post !!

I second you on that Nitin. Thank you David for all that you do here. Not just for the tutorials, but for all of the encouragements and inspiration you put out here as well. It fuels me. I hope to fulfill my pledge to become a developer this summer, and make you proud. You are my hero!

Thank you Felix! You’re on the hook!