My favorite thing in the whole world is hearing your success stories, no matter how small or large!

I’d love to hear your inspiring stories about how…

I’d love to hear your successes! It doesn’t have to fall into any of the above suggestions!

My favorite stories will get posted on this site – and I’ll send you a t-shirt for your heroic efforts! 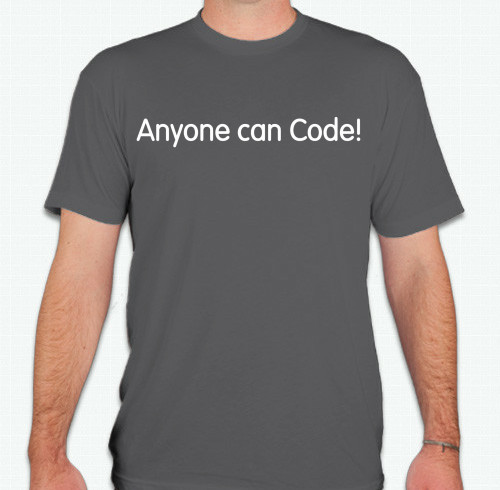 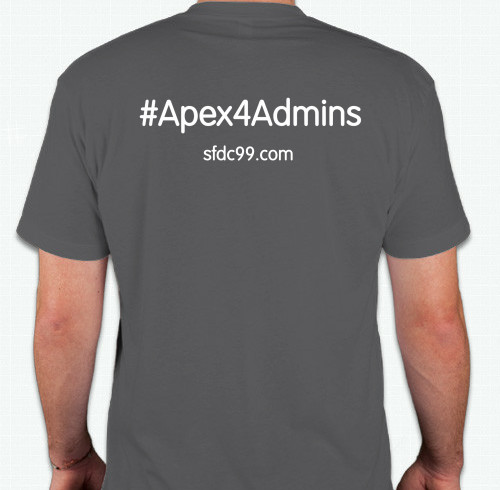 I wish I could send everyone a t-shirt! Only those that are featured on SFDC99!

P.S. I only have size unisex mediums for now. So sue me!

I am not new to Salesforce but feel a little Hanky panky while doing coding and stuff as i don’t know where to put the correct logic.But by going through your blog i have gained some confidence but i am still messed up with my logic things as from my graduation time i have an habit of mugging things up so i am not able to get out of that and that is the reason i am bad a coding.But your blog has helped me specially how to write a trigger functionality.

Very happy for you Shobhit, stick with it and you’ll see you’ll get much better very quickly!

Hi David, I recently got into Salesforce, I am following up with your site as tutorial to start.. Thanks for all your support…. keep continuing the good work..

I’ve been obsessed with computers ever since I saw one for the first time; back when I was 7, in second grade, and first had the opportunity to use one in grade school. Immediately, I was fascinated. I wanted to know how this machine in front of me was doing everything it was doing, why it was doing it when it was doing it, and how all the “innards” allowed everything to function properly.

Through high school, I was unfortunately not offered any courses in programming or development of any time, the only computer related courses that were offered were; Basic Computer Hardware and Adobe Photoshop. Both of which I took, and enjoyed, but clearly not what I was looking for. I also knew towards the end of my high school career that in order to pursue Computer Science, you must take quite a few calculus and advanced math courses. Math was a strong suit of mine, but I was rather intimidated by calculus, for whatever reason.

Because of this intimidation to calculus, and my complete lack of exposure to actual programming (yes, I could have pursued this on my own time obviously, but in high school I was more concerned about women, soccer, and video games), I decided to veer away from computer science and closer to my ability to give strong advice and my knack for being a good listener, and pursue a Psychology degree.

Living in Kittery, Maine (the most southern tip of the state), I attended University of Southern Maine as I didn’t want to travel 3 hours to and from school up to University of Maine Orono, just when I wanted to visit home. While attending USM my first year, I quickly found out that psychology wasn’t for me. Too much reading, too much studying of the brain and less of what I actually wanted to be doing, which was helping people and impacting the world in a positive way. So with this, I decided to take an Intro to Java Programming class, the first class of the Computer Science program at the school.

I immediately fell in love with programming and Java. It was the thing I had been searching for since I first looked at the computer back when I was 7. After taking the course and doing well, I realized that Computer Science was absolutely my calling, so I switched my majors appropriately.

Over the next 5 years of completing courses for the CS program, I began to learn more and more the values gained through becoming a Computer Scientist indirectly inherited through coding, such as problem solving, a logically based thinking and analysis. However, the most important thing that I realized was the fact that once one learns to program, one essentially becomes a God of a virtual world! Legitimately. This was a VERY big “light-bulb” moment for me, as I now had figured out how I would be able to impact the world in a positive way, as well as help people, both directly and indirectly through the services I could provide not only as a programmer, but as a problem solver as well.

I’ve always wanted to “change the world,” and I have found that programming is one of the easiest pathways in doing so, as anything one can imagine, one can create in a virtual world or platform.

I now have two classes left at University of Southern Maine to complete in order to receive my degree in Computer Science, one being an online Bio II course which is just part of a mandatory full-year science-with-lab requirement, as well as an Object Oriented Design course, which I am looking very forward to.

This summer I received an offer for a full-time Web Application Developer position from a wonderful small company named Freeport Metrics, based out of Portland, ME and Warsaw, Poland. I decided to take the position and couldn’t be any happier, as I will be the first developer in the United States for the company, as well as consulting directly with the clients and customers of our services. Additionally I will be fortunate enough to get to travel to Poland a couple of times a year, and be able to work from home rather often (which is nice as it is a 45 minute one-way commute to the office). The company was even willing to work around my schedule for completing my degree this upcoming fall semester. It is truly a dream come true and a dream job opportunity for me, and I am beyond excited for what is to come next.

It is a wonderful feeling to be not only a God in a virtual world, but to actually be desired and valued by companies for what you have to offer, and Computer Science and programming offer this to anybody willing to take the adventure 100%.

I know that if I was exposed to coding in my high school years, I would have never bothered wasting that first semester in Psychology, I would have found my calling much sooner, and probably would have been intrigued to do more of it in my spare time over the last decade. So for this reason, I also want to help teach people how to code, or at least offer the exposure to coding so that people can actually see what it is all about, and what it has to offer.

I’ve known David for 10 years, before coding was ever even a twinkle in his eye, when he was just a high school student who would be attending college for a Marketing degree. Look how far he has come! He is literally living the dream, working for Google! David has had a major impact on my outlook on life since I met him, as well as how I carry myself. I’m so proud of everything he has become and everything he is doing, as well as this website is only adding to the inspiration, because as I mentioned, I would like to teach people how to code at some point too.

David’s journey is the definition of the fact that “anybody can learn to code.” Hopefully in the near future I will be able to help show people this as he is and has been.